You are here: Home / The Grain Page

This page will give you some information about how grain was grown and harvested.

This is done with a planter called a “grain drill.” The grain drill has been around for over 100 years and, other than automation, remains very much the same today. 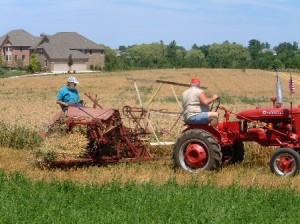 Once the grain completes its growing cycle it is allowed to dry in the field and harvested when ready. Very early methods of harvesting were done by cutting the grain by hand with a scythe. Preparation sometimes included creating a crude bundle called a “shock” or “sheaf.” Instead of using twine, the sheaf was usually held together by simply wrapping a small bunch of grain stalks around the large bundle and tying them in a knot.

We harvest in two ways: First, we use an old-fashioned grain binder. The binder, a modern version of the original reaper, is pulled through the field with a tractor or horses and cuts the stalks of the grain at their base a few inches above the ground with a sickle bar. The large wooden paddle wheel looking thing called the “windrower” then sweeps the grain into the machine where it is carried on a canvas conveyor belt to one side. At that point the grain is “bound” together with twine into a “sheaf” and a mechanical “knotter” ties it off.

The sheaf is then discharged off of the side of the machine onto the ground. Sheaves are then picked up by hand and arranged in piles known as “stooks” where they continue to ripen. The grain will then be loaded onto wagons and brought to the threshing machine where the grain kernels are separated from the stalk or straw. Some types of grains are wheat, oats, barley and rice and the term “threshing” means “to separate the seeds of grain from the husks and straw.” 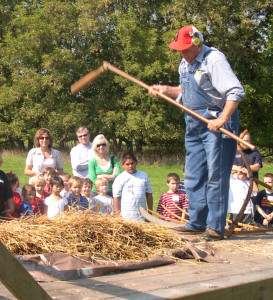 Early threshing was done by laying out a canvas tarp, breaking open a sheaf of wheat and spreading it in an even, shallow way, then beating the grain with a “flail.” The flail is simply two pieces of wood fastened together with a chain. One piece of wood was the handle and the other was used to strike the pile of grain with brute force. After all of this work, the kernels are off of the stalk so you would pick up the loose straw and move it off to the side. What remains on the canvas is a combination of grain and “chaff” or husks. To get rid of the useless chaff the material is tossed into the air, preferably on a windy day in a process called “winnowing.” The wind blows the feather light chaff away and the heavier grain falls to the canvas.

The first mechanical threshing was done with an open threshing cylinder sometimes called a bush-hog and powered by hand or a foot treadle. Larger threshing machines were powered by animals such as donkeys or horses. The advent of the steam engine in the later 1800’s brought true mechanical power to the farm and threshing operation. The steam engine powered the thresher via a long, flat drive belt. Steam power was used in many cases through the 1930’s when it was replaced with a gas tractor driving the belt in just the same way.

How Threshing Machines Work and are Constructed 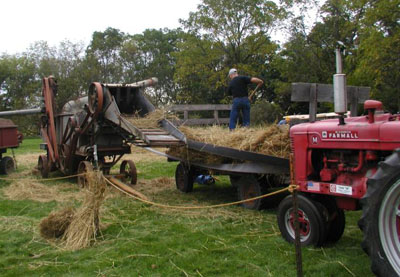 The way all machines thresh is basically very simple. Grain on the stalk is brought in from the field and is fed into the machine where it meets the “cylinder.” The steel cylinder rotates fast and has teeth on it that strike the grain separating the kernels from the stalk. The stalks are called “straw” and are carried to the rear of the machine by reciprocating “Straw Racks.” These racks have openings in them so that remaining kernels can fall off of the straw through to the bottom as they are shaken. The straw is then discharged out of the rear and used for bedding of animals and even fuel for the steam engines in the field.

The grain is what is most important. It falls through reciprocating “sieves” that have openings just large enough for the kernels to pass through. As they fall to and sit on the sieves, a fan blows air under the sieve and this removes the tiny shells that surround each kernel. This “chaff” is eliminated with the straw. You may have heard the Biblical reference to separating the “wheat from the chaff.” Now the grain is clean and can be used for feed, seed or flour. Threshing machines were also used for separating just about any seed or kernel such as corn, soybeans, barley, clover and more. The first threshing machines were small, made of wood and the grain from the field was fed in by hand. The grain went into a bin or bag and the straw either fell out of the rear or was stacked by a small conveyor. 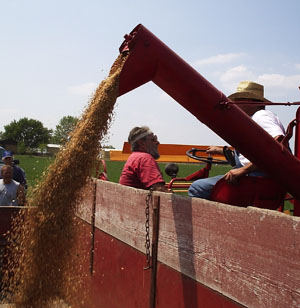 Grain that has been separated from the stalk

Most threshing machines beginning around 1900, though still made of wood, were equipped some great new features. They had a conveyor or feeder in the front that you could pitch whole bundles in with a fork, complete with the twine tie, which was then cut by reciprocating knives as it entered the machine. The clean grain was brought from the bottom of the machine up via an “elevator” to a “weigher.” The weigher had a small bushel-sized hopper that floated on pivot and balanced against a counterweight. Once enough grain filled the hopper, the counterweight allowed the hopper to come down dumping the grain into pipe and then into a wagon or burlap bag on the ground. Each time this sequence took place, a counter was also tripped to record the amount of grain paid out so that the farmer knew the how much he had produced. The last major improvement was called a “windstacker” or blower. Instead of straw just coming out of the back using a conveyor it was now collected inside of the rear of the machine and thrown by high-speed blower blades through a round duct and into the air. This made it possible to create very large stacks of straw wherever you pointed the discharge duct without having a person tend to them with a fork. Some windstackers also had an automatic mechanism to move the discharge back and forth like an oscillating fan to spread the pile over a wide area without manual help. Wooden threshing machines were phased out by the 1920’s and replaced by those made of galvanized steel. The newer machines are described by two numbers such as “22 X 38.” The first number is the width of the cylinder in inches. The second number is the width of the inside of the separator itself. 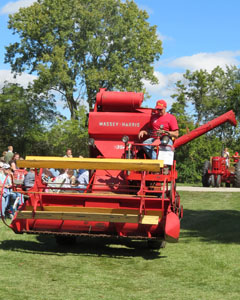 The most recent development in harvesting has been the combine. Its name is just what it does, combining the functions of the binder and the threshing machine. It goes through the field cuts and separating the grain as it goes. 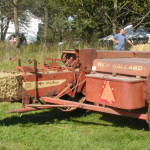 Early methods of baling hay or straw used a stationary “hay press” or baler. These belt driven machines were very simple and used wire to tie the bale together. The spooled wire would be hand fed through wooden blocks that were inserted in the chamber to separate the bale and the wire was then tied by hand. Later balers ran through the field behind a tractor with early versions still requiring a wire tie. More modern machines use baling twine and have a thrower that launches the bale into a caged wagon for one-man operation. Large round bales are quite popular now. 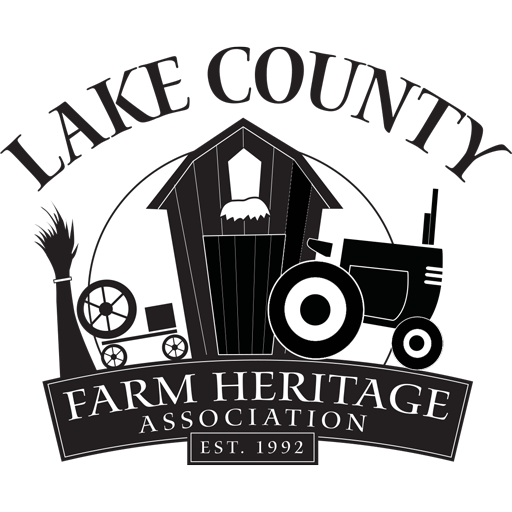 We are a 501(c)3 not-for-profit group with the goal to preserve and maintain the history, machinery, and ways of the early farmers for all the generations to follow.